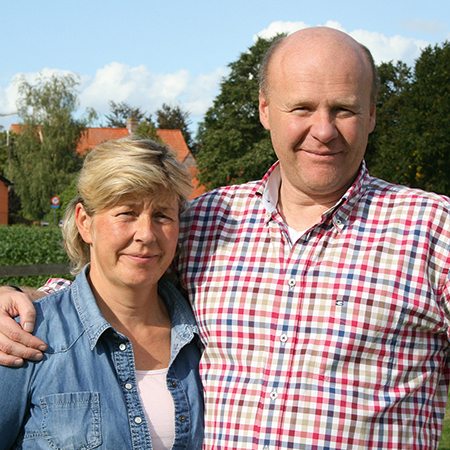 The way to the top of Anthony Maes, assisted by his wife Chantal, has really been wonderful these last few years. In 2015, he already was in the spotlight with Provincial top results such as:

How will Anthony and Chantal continue in 2017?

Chantal and Anthony are a duo that complement each other very well, both at a professional level (vegetable and fruit business) and in their hobby, trying to manage things as well as they can. The largest share of taking care of their colony is in the hands of Chantal. In the late afternoon, Anthony also helps out and he likes to observe them after a hard day of work.

By tradition, Tours is the opening race of the season for the West Flemish province and also serves as preparation for the national races; i.e. Bourges for the difficult middle distance and Limoges for the long distance races. If possible, everybody is their to enter their team in this preparation race. A lot of pigeons take part in these opening races – a total of 3,353 yearlings and 6,720 old birds (including doubled yearlings) started here in the Tours race.

How are the birds taken care of and what plan is the care based on?

Before the season, the pigeons receive Hexenbier every day for 3 to 4 weeks. This makes sure that they get a good natural basic condition – a “nice and clean body”, “soft feathers”, “white noses” and “white around the eyes.”

During the preparation period (in March), the pigeons are trained 5 to 8 times at distances of 10 to 30 km. This provides tham with the confidence they need.

Here, in Waregem, they race both the cocks as the hens. The cocks train twice a day for about 30 minutes and the hens also twice a day but in their case 15 minutes is enough. Eager pigeons often train well with short periods.

On arriving home from a race, the birds always receive a combination of Avipharm (electrolytes) and Mumm (glucose), this makes them recover faster and better.  In addition to this, they also receive fresh grit, enriched with Winput. The grit ensures a good digestion and the Winput increases their resistance while providing better immunity. Anthony often adds some seeds so the pigeons can eat it faster. The pigeons usually return home from the difficult middle distance races on Saturday. On Sunday and Monday, they receive Entrobac in the drinking water – this is a probiotic that both protects the digestive tract and raises the immunity. On Sunday, he also adds Avitestin to the feed, again to protect the intestines. This is also an ideal product to prevent trichomonads.

He already starts to focus on the next race on the Monday: punctual care taking, feeding and training; every week, he adds Blitzform and Hexenbier in the drinking water. On Wednesday, the day before basketing, they receive Gervit-W vitamins. This system has already proved extremely successful.  Anthony finds that it makes his birds much more vigorous and lively. He also feels this when he takes the birds in his hands; in top condition they simply slip through his hands. The softness of the feathers are very important and gives them some time advantage in the races.

Before basketing, the racers are always provided with Avisana drops, this process being repeated on their arrival back home. Before important races, they sometimes provide the drops several times a week. This protection lowers the likelihood of infection.

But don’t overdo it …

Although Anthony and Chantal have a lot of space they still keep the racing team limited to 42 cocks and 18 hens. These 60 birds are raced using the system of pure widowhood (the partner stays at home) and with the addition of 100 youngsters a year, the racing team is complete.

In the care taking, their principle is also simplicity. The pigeons are well cared for but this care is not overdone; no motivation techniques but rather go along with the quality of the pigeon.

As added products, they prefer Röhnfried products, which they copiously use. From experience, they know that these ensure that their birds both stay healthy recover better. In recent years years, they have achieved several top results and these products give them confidence and stability. Is this a “must”? Maybe not, but they score with top results from the first to last race – and this probably wouldn’t be possible without these extras.

We already mentioned their double victory at Tours, the opening race in the middle of May. In July, the team again achieved a provincial victory, i.e. Châteauroux against 1,589 old birds with “Schicht” 3007164-15, another top Waregem pigeon.

This season, his first as an adult, he won 6 Nat Châteauroux I against  20,404 pigeons and from  Chateauroux II: 1 Prov against 1,586 pigeons and fastest of the province against 3,912 pigeons…. Further also 49 Prov Argenton.

At the base of the Maes colony, we find pigeons from: Jacques Catteeuw (Deerlijk), Andre  Debeuf (Woumen), the late A. Bouckaert (Gits), the Lesage Brothers (Rumbeke). Since 2007, other lines have been introduced, such as the late Roger Degraeve (Voormezele), Patrick & Dimitri Houfflijn (Wortegem-Petegem), Chris Debacker (Beveren-Leie), the late Frans Parmentier (Wevelgem) and a few toppers from Gaby Vandenabeele (Dentergem).

Highlights of the last 5 seasons: