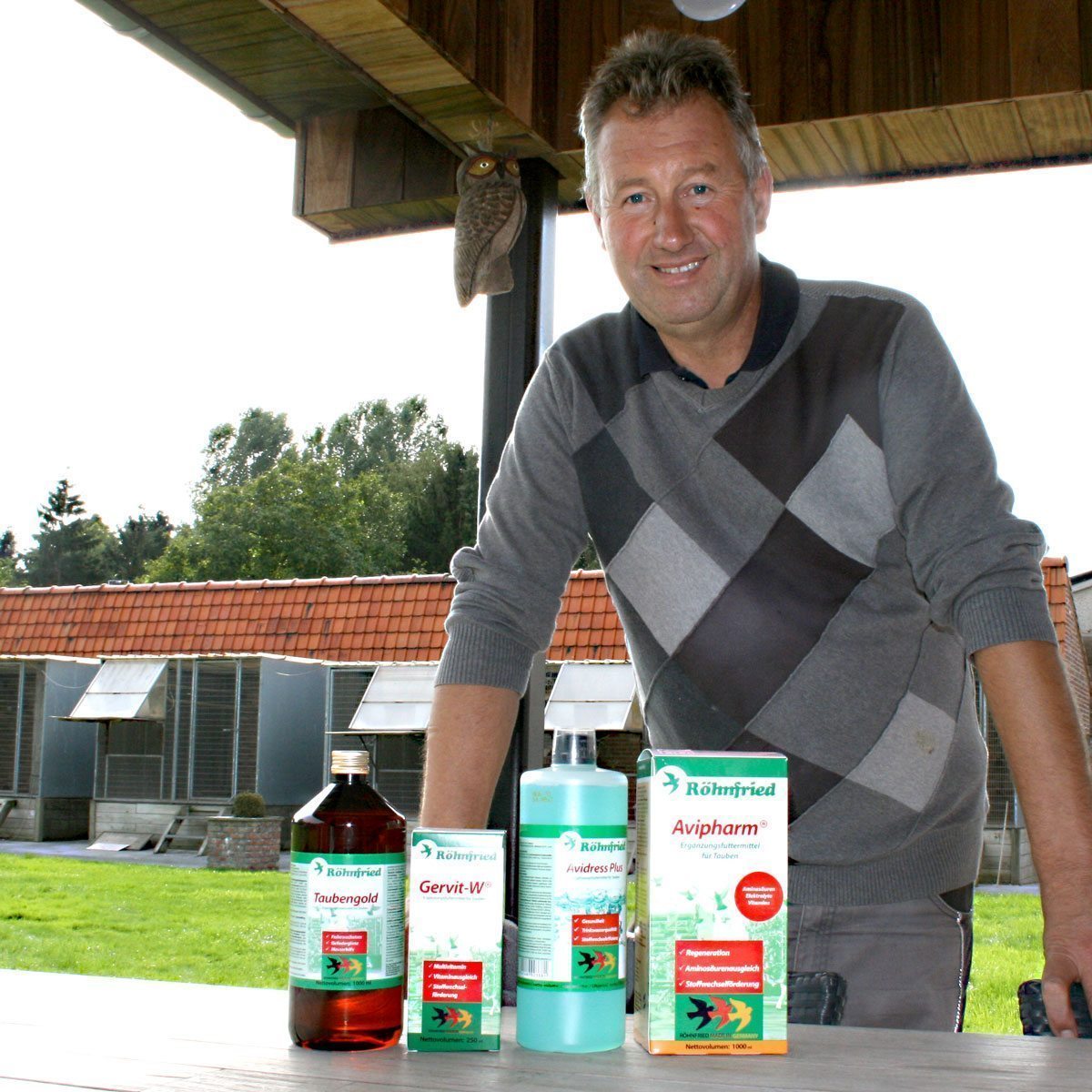 Gino Clicque is an honest man, who does everything he can and needs to do. A hard worker, a winner, a fancier who knows what he wants.

As we drive towards Wevelgem, we immediately think of the classic cycling race “Gent – Wevelgem”, known as the Belgian classic with the “Kemmelberg”, where many racing cyclists give up – they have to be tough guys to make it to the end. When we arrive at Gino Clicque’s loft, we notice that here, too, his athletes have to be hard workers. Gino was born into a working-class family in 1962. “You have to put in a lot of effort to accomplish your goal”…. But luck was not on his side.  At a tender age, he lost his father Germain (1978) and then as an adolescent, had to continue running the business and the pigeon sport both – with both he became “big”.  His father showed him the ropes and sent him to a master: De Smet & Son, where Gino learned a lot about pigeon racing. He quickly found out that if you want something, you have to work for it.

The first few years, pigeon racing was just a hobby, and although he always took part he was classified in the national championships as a “beginner”. Aside from that, he successfully created his own business in the construction of log cabins, terraces, etc. These past few years, pigeon racing has taken up all his time and attention. He worked hard for it and now he’s at the top.

2017: Gino started with a large group of yearlings and youngsters from 2017, all bred from the golden stock of top pigeons. These have the golden blood of top colonies such as Figo of Anton & Hilde Reynaert and Noël of Robert & Chris Dobbelaere and Lucien, (Lucien Staelens) and since 2012, a golden move with the reinforcement of the bloodline of Bliksem of Gaby Vandenabeele (which has already produced 3 national winners). All old and famous basic bloodlines of a superior middle distance racer with many first prizes and a national victory in Bourges paired with hard-as-iron long distance racers, stemming from a National Ace Cock Long Distance KBDB. Plus the superb Wittenbuik – Bliksem line of Vandenabeele: “Power, speed and endurance, everything collected here in a very nice way.” There was also reinforcement from some other top pigeons, but the most important are these 4 bloodlines.

Care-taking at the highest level:

Those who think they are meeting a ‘loft manager’ here are completely wrong. Pigeon racing here is more than just a “full-time” job. Gino has put together a good time plan, in which he is helped by his wife and son. His wife Kristien is responsible for the administration; the pedigrees, etc. His son Jasper is there each morning to provide the pigeons with fresh water and fresh mineral mixes (here they prefer Röhnfried minerals because they are of great quality).

During the season, Gino starts at 7am. First, the hens (these race on the total widowhood method) are trained for one hour, once a day. Next come the cocks. In spring the cocks (also racing on total widowhood) train once a day and then come the cocks that are raced on pure widowhood. Later in the season, when the pigeons know their compartment, all cocks train together and if possible, train twice a day. The racing pigeons are paired in March and can “sit on the eggs”… they get used to the nest, but do not raise any youngsters. The advantage here: they become much more attached to their box, the pairs know each other quite well and the hens will not pair that easily during the period before the races.

In the first weeks, the pigeons have to be hampered as often as possible. They need to work hard, but they always receive top feed to do so. During the period before the races, the birds get Avidress Plus in their drinking water almost every day. That lowers the risk of infection. When you participate in races with such a large team, it is very important to avoid all risk of infection! During the season, he always uses this product on Mondays and Tuesdays and when the pigeons arrive home from the races, they are always given Avipharm (electrolytes) in combination with Mumm. It is important that the pigeons get everything they need. He learned that from his father Germain: When you work hard, you need to eat well, too! Never go to sleep on an empty stomach.

This last season, Wevelgem was confronted with “bird flu”, a problem in pigeon racing in which Belgium still lags far behind neighbouring countries when it comes down to the protection of the fanciers. During a 3-week period, Gino Clicque was not allowed to participate in the races. Lucky for him, he was just a few metres outside the circle where the pigeons had to remain in the loft, and so he was allowed to train them. The first national races had already been successful, but how could he solve this? He chose the following tactic: the birds trained every day, twice a day; to avoid them pairing, the cocks and the hens could come together twice a week, usually on Wednesdays and Sundays. When he was allowed to participate in the competition races again, the next race on his programme was the national race from Limoges on July 8th. The whole team was hampered! The hens remained at home for 3 weeks and the cocks even 4 weeks! Nevertheless, the result was superb; with only yearlings in the competition, he won on the national level against 10,554 pigeons: 6, 12, 17, 32, 35, 40, 58, 59, 84!!!!!! Or 9x Top 100 national! It wasn’t an easy race; the pigeons were released at 7am and the first was clocked at 15:49 at a distance of 603km (a speed of 1,193m/min) and they followed quite quickly….15:49-52-54-57-57-59-16:01-01-05-11-13-16-16-17-17-18.

We took note for you