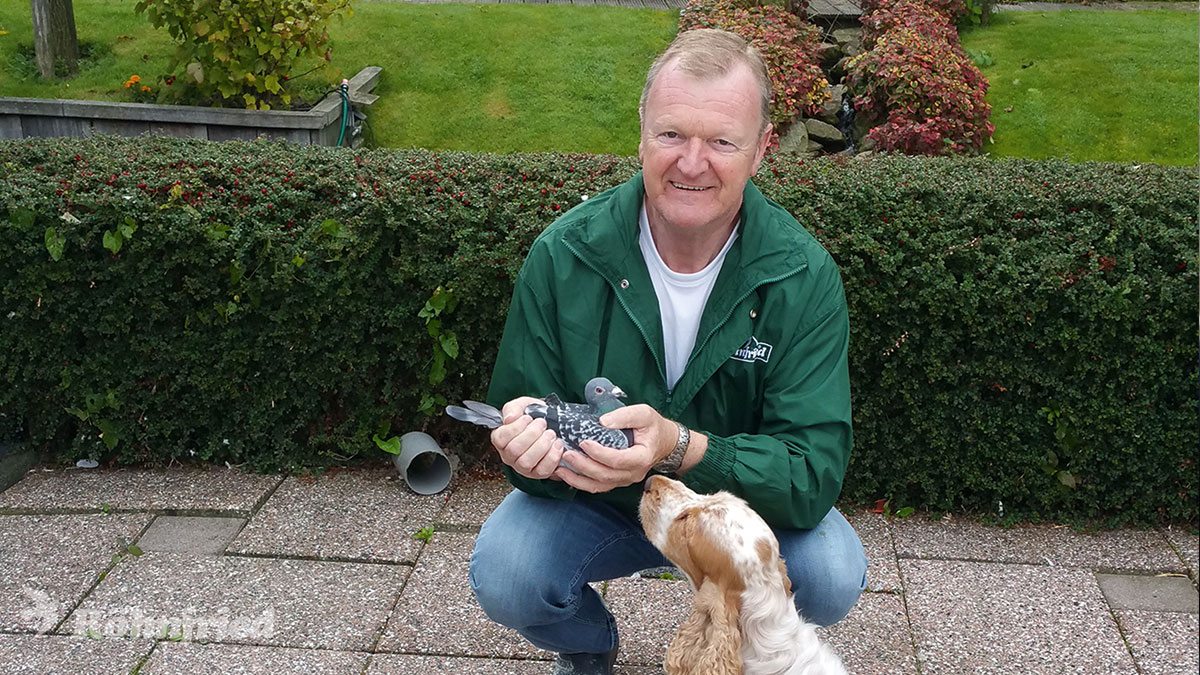 He is still motivated! I met Kees Bosua for the first time in Ophasselt at a public auction some 20 years ago. He is a passionate searcher: he wants to win, is always looking for the best and if possible, he buys it. He is never afraid but always looks ahead and tries to win. And that is the reason why he is still doing it. Last year, in 2016, he switched to the “total widowhood” method and his conclusion is: “I like it very much…”

During our visit at the end of 2016, he was busy reconstructing his lofts, which were already older and in need of renovation.

Kees is always optimistic and knows what he wants. When it comes to pigeons, he wants to win. The 2017 season closed very well; he will be crowned as 1st National Champion of Holland One Day Long Distance. Or to put it another way, the best in Holland with his pigeons winning 1st and 2nd in the races from 400-600km!

At the beginning, his colony was based on the world-famous “Autokoppel”, a topper of Arie v.d. Rhee (Alblasserdam) paired with a daughter of Uno of Raoul Verstraete (Oostakker). They became parents of many famous birds such as Miss Marbella (1st Provincial Sens against 24,033 pigeons + winner of a car). This winning hen was paired with Porky and again, top pigeons were born. The famous Kerkduifje and her nest-brother Kannibaal were also grandchildren of Autokoppel.  Kerkduifje went down in history by winning the national victory from Le Mans against 120,936 pigeons!!! Then, Kees became famous all over the world, but because of the pressure and demand, he decided in 2008 to sell the greater part of his colony. He held on to the base, though. Today the name of Bosua is still found at the top of pigeon racing, but he has stopped doing business. All he wants is to race his feathered friends and enjoy it!

2017 was the first year he raced his birds from his renovated lofts. Now, there are open aviaries in front of each compartment. This gives the pigeons more oxygen and is also much easier for the fancier himself. With the “total widowhood” method, the hens stay in the aviary all day long (these are covered and not draughty!). In the evening, around 5pm, they move to the resting compartment, where they are closed in via a sliding door and where can rest and remain as calm as possible.

What’s important according to Kees Bosua?

A good loft: dry, clean and free of draught

Regularity: everything should be done at the same time every day with respect for the biorhythm of the birds

Good feed: “When you work hard, you have to eat well.”

Observe: spend as much time as possible with your feathered friends, so you can see what needs to be done. The pigeons will let you know.

Good supplements: every day the breeders as well as the racers receive several kinds of minerals and picking stones, which provide for good digestion. It is probably the cheapest, but best product to keep the pigeons in good health!

Care during the season

On arrival from a race, their first drink is always pure water. Afterwards, they receive electrolytes (Avipharm) and glucose + vitamin C (Mumm). Next, for about 3 days, he uses Hexenbier (this provides for nice clean bodies, white noses and healthy pigeons).

Three days a week, RO 200 conditioning powder is sprinkled on top of the feed.

Care during the moulting period

For Kees, this is the most important period of the year. During that phase, the pigeons need all necessary nutrition. It is the time in which their new feathers are formed for the next season. If you make a mistake then, you will notice it in their feathers! During that period, they receive extra vitamins such as Gervit-W and Bt-Amin forte in their drinking water every day. On the feed, he uses Taubengold and RO 200 together with Pavifac.

Care during the breeding period

Here Kees likes to use Avidress Plus, which ensures that the intestines remain in good condition and that the pigeons breed beautiful youngsters. During that period, he also uses Gervit-W two or three times a week.

The rockets of Dordrecht:

Her sire is a half-brother of Moreno and her dam is Quenta, who is a half-sister of Ultra Boy. Kees also had sensational success with Joey (4th National Ace Pigeon in the One Day Long Distance)

Joey´s sire is Charlie, who himself was 1st National Ace Pigeon in the Heavy Middle Distance, and Joey’s dam is Choncita, who is a very good racer stemming from Kees‘ stock line.

4th National Ace Pigeon in the One Day Long Distance 2017