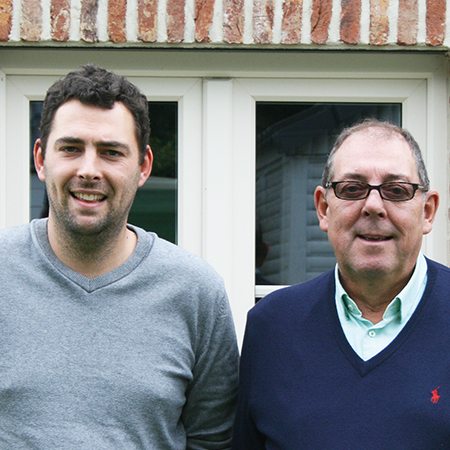 They’re back in a very short time!!!

At the end of the 1990s, Eddy Leutenez stopped working but his son Maarten wanted to continue. Eddy, who had already won 9x1st Nationals, wanted to help him and in Kruishoutem this means: go for the top! They were not interested in anything less and so the train picked up speed again. At the beginning, their premises were rather limited – a small compartment above the garage (later expanded) and building some lofts in the garden.

Eddy the “expert” made sure that it took only a few years for “class” to arrive back in the loft, while in the meantime Maarten also learned what they needed to reach the top again.

The foundation for their success was provided by the famous “Bolleken”, a top hen with super muscles that had been responsible for victories and “minutes in advance” with José Denoyette. He bought this top hen and Bolleken belonged to Eddy and Maarten. This proved to be a bullseye because she was part of the basis of the present colony. Afterwards, her parents also moved to Kruishoutem. After a while, they also visited an old friend: Marc De Cock (Race Pigeon Farm Belgium), the owner of top talent. There Eddy regained the Milan strain (1st Provincial Blois and 6th National La Soutteraine) and also brought home a De Rauw-Sablon strain hen and a young Eagle Eye (Erik Limbourg strain). This then became the basis of the present “Leutenez” generation…..

From 2010, straight to the top. Maarten made sure that he had enough time to take care of the pigeons. They added a few more more lofts, which was combined with good breeding and astute selection! Soon afterwards, they scored with top results.

Important points to consider are:

– Punctual care-taking, the birds always train at the same time every day!

– Every week, they have a bath with bath salt.

– On arriving home from the race – always Electrolyt 3-Plus, together with Mumm.

– After the race, a K+K protein tablet so they recover fast.

– Once a week on the day before basketing, the racers receive Gervit-W vitamins (sometimes replaced by Blitzform).

– 2 or 3 times a week, Energy Oil is added to the feed, so they can build up their reserves for the next race.

– On the day after a  +250 km race, the birds receive two or three meals, Hessechol on the feed with Pavifac beer yeast or Ro200 condition powder.

During the moulting period: 5 to 7 days a week, the birds receive Röhnfried Taubengold in their drinking water. All racing and breeding pigeons receive Avidress to drink everyday of the year. This results in them always being in good condition. During the breeding, the pigeons receive Gervit-W at least 3 times a week.

New in 2017 with the National Ace-pigeons KBDB was the “Allround” Ace pigeons, very important to a colony such as this one of the Leutenez father and son.

What are these pigeons intended to win? ”Allround applies to a pigeon over 5 races, classified per 10, separated by old birds or yearlings:

This competition can be compared with the pentathlon events for athletes.