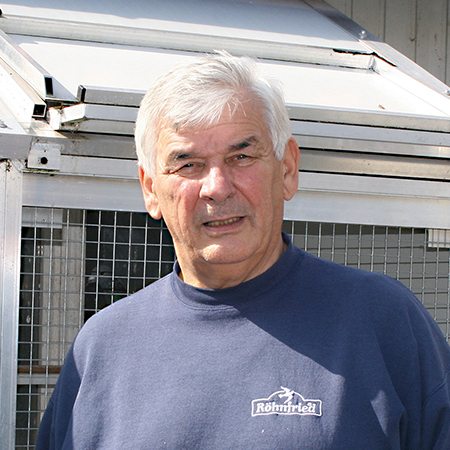 Always at the top

That was the motto last season, that is it now and so it will remain in Herent. Breeding, racing, selecting and doing everything possible! Every year he continues to surprise the pigeon world: Albert probably has a “special gift”… He’s a good observer and he starts the season with a group of pigeons, which he already selects after a few races. At that time he takes his decisions, culls and sticks with it. Sometimes, they are cocks, sometimes hens, but the attention he gives and the investment he makes, go mostly to a limited group: the good pigeons. Those are the ones able to win without much effort and no rewards. He has often battled against the “big masters” with his small team and often with success…

Albert is a fancier who wants to win, who is always aiming for even better. Adapting the methods: darkening, exposing to light, the system with the cocks, with the hens – he always tries to be ahead of everyone else. That is the only way I can describe him. He likes to talk about our sport and is in contact with the very best among us. He tries to hold on to those contacts and is always there where top pigeons are to be found, to reinforce his own; the famous Paulien, Valeska, the origins of the golden pair. He knows those pigeons and knows what they need and how they act, and tries to improve, which he often succeeds in doing. His results are proof of that.

The group this season did not number any more pigeons and that does not necessarily mean that you have good pigeons under your roof.

Top priority in the loft of Albert Derwa

Hygiene: very clean lofts, which are cleaned twice a day.
The feed: as much “pure” feed as possible: he rarely adds something on the feed, but last season did so for the first time. Hexenbier in combination with Entrobac, but only for a few days at the beginning of the week. Why? According to Albert, they eat more when the food is “pure” and the more they eat, the better they train, the faster they get into good condition.
Drinking water: he also pays a lot of attention to the drinking water, which he refreshes twice a day. Something is always used in the drinking water: the basic products here are still Avidress Plus and UsneGano because used in this combination, the pigeons stay good health more easily. Both before the season starts and during the “dead” period (September to March).

Apart from that, Albert never takes a risk and his birds are always vaccinated against paramyxovirus and paratyphus. Before the season starts, they also get a preventative cure against canker and for their heads. He does not know if it is necessary, but feels better doing so. Afterwards he takes them to the vet for a check-up. If the pigeons manage to make it in good shape to the start, several prizes are guaranteed.

About training and care in general

Once the heavy middle distance races start, the hens train only once a day. Every day they get fresh mineral (he likes using Röhnfried mineral mixtures such as Expert Mineral, Reise-Mineral and Leckerstein) and so these are given every day. He also adds some extras such as seeds, hemp and sunflower seeds.

The pigeons always get as much as they want and any feed that is not eaten is used later on that day. On the day of hampering, they also get an extra portion around 4pm.
The hens are free in the loft and those that start pairing, are removed from the loft.

On arrival home from the race, they find a combination of Mumm (glucose and vitamin C) + Avipharm (electrolytes) in their drinking water. Last season, he used Carni-Speed (carnitine) for the first time for 4 days a week. He started using that because a fancier friend recommended it. For good results, it is best to use L-Carnitine every day because pigeons produce only a minimal amount themselves. It ensures good fat burning and thereby improves condition. He also uses Hexenbier often, especially before the season starts and over a 3-week period. This product gives the birds good breast tissue, which means better condition and also greater resistance. He repeats that during the season. Before the heavy middle distance races (+460km), he often uses Bt-Amin forte in combination with amino acids, B vitamins and electrolytes, which have a positive effect on the muscles. He also has had good experience with Blitzform (iodine ensures good blood circulation, increased oxygen, energy, condition…)

Good preparation: do not rush into anything, do not leave anything to chance, try to manage your colony as it should be done. That is also Derwa. At the beginning, his birds are brought back into line, the old birds and the yearlings, too, with several short flights up to 20km. That can be repeated with the youngsters, short flights of 30km; even in between races, the young birds get extra training up to 30km. This is always done as soon as possible in the morning.

During the moulting period, the use of Taubengold (methionine helps get perfect feathers) is very important but Hessechol is important, too. You soon notice the change. To keep the feathers nice and soft, always bathe the pigeons with Badesalz when they return home from a race. It relaxes them and they become calmer. Also on the day of hampering, let them take a bath… again to relax them so they can be hampered more calmly and afterwards, they have a good appetite (that’s why there is the extra feed on the day of hampering).

Besides the use of Hexenbier, Carni-Speed and Bt-Amin forte, Albert also adapted the loft: each compartment now has a small aviary. When the weather is good, the birds can always stay in the aviary, where they get more oxygen and have more space. When they arrive home from the race, the cock and his hen are locked inside their nest box. That makes them much calmer and they enjoy being together, which motivates them for the next race.

The star of the loft: Izaura

From 2015 to 2017 she won a total of 36 prizes with 21 being in the Top 10 and a total of 6x 1st competitions. The sire stems from the Paulien line, the gold stock of Albert and the dam is a granddaughter of Harry belonging to Jan Hooymans.