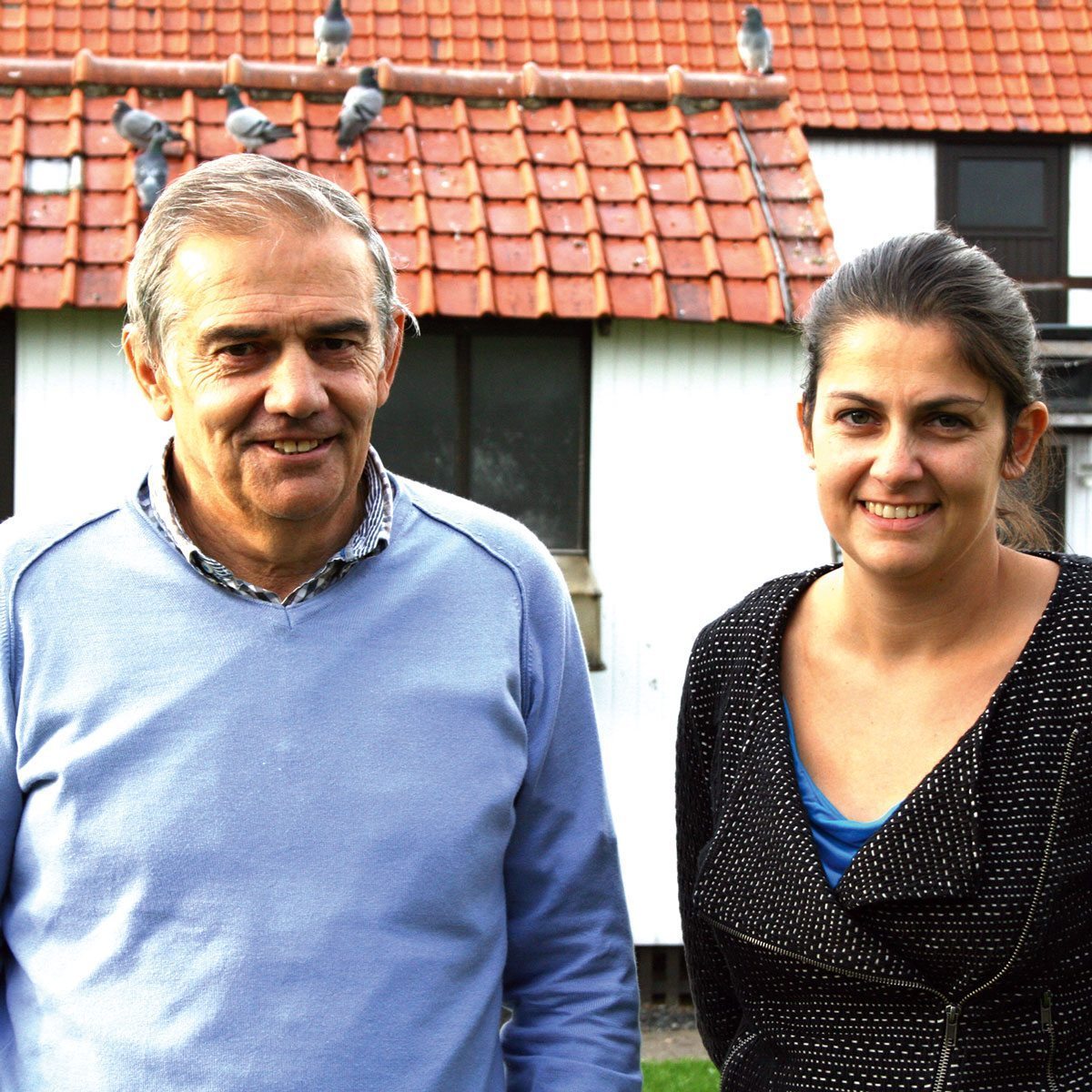 THERE WHERE EVERYONE WANTS TO BUY PIGEONS

“Gaby Vandenabeele pigeons” are those that became famous all over the world. Everyone knows the names Wittenbuik, Bliksem, Rudy, Super Romeo, New Bliksem…

The descendants are fabulous! Year after year – and here we are only talking about the winners in Belgium – we find several national winners that have the Vandenabeele blood in their veins.

How do you achieve such quality, such references?

Or, how do you get the name of being the owner of the “most wanted pigeon blood in the world”? Because you deliver quality, because you use strict selection, because you have little inbreeding and still have the same foundation that has produced winners, generation after generation, year after year!

That happened many years ago in the beginning, and the strain of the famous Kleinen, his son Wittenbuik, and the latter’s grandson, Bliksem; then Rudy and his sons, New Bliksem 024-13 and Super Romeo 052-12. These are all hallmarks of a colony that has become famous the world over.

Gaby puts a lot of work in his breeders, he has always tried to keep them as “pure” as possible through “strain breeding”.  He knows his pigeons and knows what they need. Sporadically new ones arrive in his loft but they have to be super pigeons. The last few years he has been lucky as many fanciers have had success with his pigeons. His current tactic is to bring his own bloodline back into these toppers. That has often provided the necessary kick.

Here in Dentergem, everything is still rather traditional. There are 4 compartments for the widowers; maximum 56 cocks, old and yearlings together. A key aspect: once they have a box, they keep this for the rest of their racing career. The partner of the cock also remains the same. This is important when he has to return home, there is always something he can look forward to. They also train every day and always at the same time. Besides this, the pigeons are kept as close as possible to nature. During the “dead season”, they are free to do whatever they want, all day long. During the racing season, though, they have to listen, be skilful, follow and win prizes!

For many years now, Gaby has been loyal to the Röhnfried firm. Why? It’s very simple: “Because these are good products!” It is probably one of the few firms that do good research in pigeon racing. They bring products on the market that have been tested with good results before they appear in shops. They listen carefully to the demands of pigeon fanciers and evolve along with our sport. They try to provide answers to fanciers’ needs.

Which are his favourite products?

Blitzform has been No. 1 for years. The extra stimulus from the iodine has often been the reason for his top results. A nice pink breast, white noses, joy of flying. You actually notice quite quickly when pigeons have been given this product.

Gervit-W: this is probably one of the most traditional vitamin preparations on the market. It has been in the shops for years now, but is still a product that can perform miracles – during the breeding period as well as during the racing season. When the pigeons arrive home after a difficult race, just one tablespoon on top of their feed is enough and you quickly see how they recover.

Avipharm: again, probably due to tradition, but it is very effective and if that is good, there is no need to change.

The youngsters always get Avidress Plus in their drinking water. This is another top product that has been added in recent years and has helped keep the pigeons in good health!

The racing pigeons also receive this on Mondays and Tuesdays in combination with UsneGano in their drinking water (the result here is good droppings and stimulated down moulting).

Key points: When Gaby was searching for his foundation material, he always took the age of the bird into account. The family and management of the fancier were also important aspects. The pigeons had to come from lofts that scored at the highest levels and were not doped up. There also had to be pigeons that still scored well at the age of 4-5 years. Quality pigeons need to be very vital and fertile. New reinforcement always had to be young pigeons, preferably from a loft where they were already successful with the Vandenabeele bloodline. These birds first have to participate in races and prove their ability before moving to the breeding loft – that is the motto in Vandenabeele’s loft.

Some important characteristics, which these pigeons need to possess:

To be placed in the breeding loft, the birds need good origins and have to prove that they can perform well even in harsh weather conditions and recover quickly. You get good pigeons by giving them a good test! In the wing, he prefers good ventilation and the rest is test, test and test again.

If you ask Gaby how he manages to stay at the top for so many years, he immediately answers, “Selection.” All the current top breeders have achieved top results in races with headwinds and speeds of 1,300m/min – this is where the wheat is separated from the chaff. Soft-feathered pigeons of medium to small size and full of character were always the foundation of his colony.