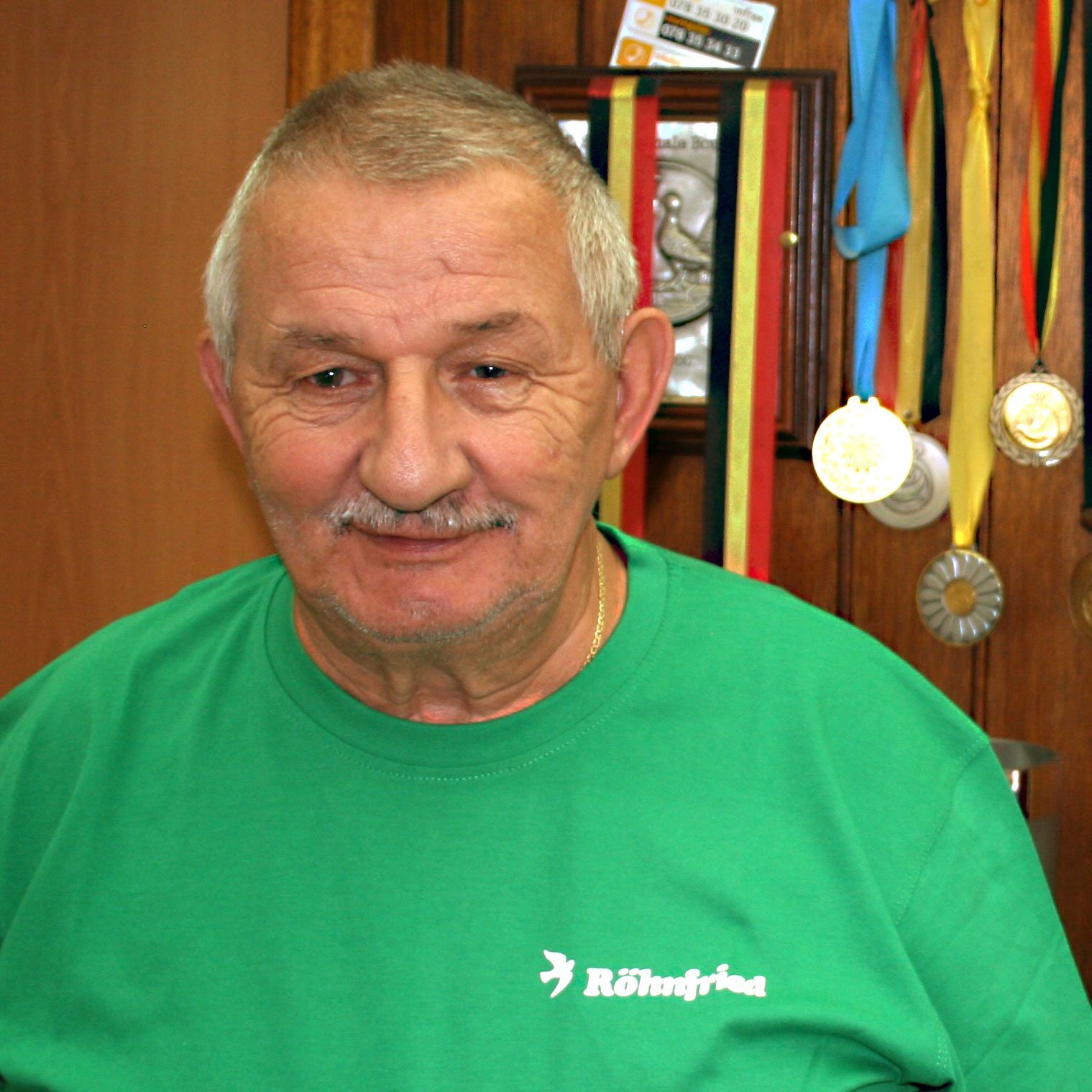 Very strong middle distance racers, all of whom have the blood of very important breeders in their veins, namely the famous Little Joe B 04-6231810. A top breeder, bought by Johny and Magda from Jos & Jules Engels (Little Joe is a half-brother of the famous Marieke – Olympic hen). His father was the 086-97 (father of Marieke) and Little Joe’s mother was the 851-99, sister of the mother of Marieke and Gueretje). Particularly the 645 hen; B 05-2204646, daughter of the 393-04 Abel, the old base strain of Jonckers, namely Zabel (winner of Bourges with Jonckers), Marieke Engels x Kleine Vooruit strain, Artiest, Houben basis) became a phenomenal breeding pair. Where we earlier spoke about the direct descendants, we now see that the grand- and great grandchildren also score with top results.

Is it still necessary to present Johny and Magda Jonckers from Linter? They already have several national victories on their prize list, have already become national champion KBDB and they are famous for their passion. Not too many pigeons because they do not have a lot of space but this makes sure the selection is that much stricter. Only the very best are allowed to remain in the loft. Yes, they are both getting older every day but they still take very good care of their colony with a 120% effort – otherwise it wouldn’t be possible.

All very punctual, shooting for victory.

Johny and Magda are totally focused on pigeon racing – it’s their life. They do everything for their feathered friends and when their pigeons gain top scores, they enjoy it. And when the results are not as they should be, they work even harder to get where they want to be – at the top and winning!

The loft are cleaned every day, the drinking pots too. Everyday they use Avidress Plus in the drinking water to control the pH value; this keeps the birds healthier and there are no problems with trichomonads.

Only the very best is good enough!

The origins of the super pair Littel Joe x the 646 hen brings us at the Engels and Houben base. Johny used to work in the sugar factory in Tienen, where he had to work hard. Although it wasn’t always easy when he wanted to buy a pigeon, he could always count on Magda’s support to make their dream come true – to belong to the top of Belgian pigeon racing. This is indeed a colony where getting to the top was a step-by-step process. They always held on to their crack birds as a basis for building their colony on. This was was reinforced by pigeons from Gaby Vandenabeele (from Rudi), the Herbots Brothers (from National Ace pigeons), the Vandeneede Brothers, ….  Only the very best is good enough….

2016, though, was a very difficult racing season and after the loss of some pigeons, top birds such as Rudy 504 ( 1 I.Prov. Bourges 2,417 pigeons – 3 I.Prov Montluçon 2,328 pigeons – 6 Nat Bourges 21,522 pigeons – 16 Nat Châteauroux 18,658 pigeons – 22 I.P. Châteauroux 2,773 pigeons and the 2 Nat Bourges), moved to the breeding loft. And one thing is certain: when the base is super, then quality will always return and they have proved this in the first part of this season with some beautiful victories: 1 + 2 I.Prov. Argenton 2,251 yearlings: “National Argenton is a classic among the difficult middle-distance races, where Johny Jonckers already scored very well several times and now, in the 2017 season, he did it again. Their yearlings were in super condition and this time with 2 yearlings they won 1st and 2nd Int. Provincial against 2,251 pigeons. At national level, they also achieved a top result with 5 and 6 National against 22,319 yearlings. Once again a top result by this super colony. The 1st yearling is the 2074101/16, which had already flown brilliantly in the races from Vierzon and Châteauroux before he scored a top result at Argenton. He has surely inherited these qualities from his father: “Rudy 504”, who won the 12th Nat Ace Difficult MD 2015, following which he received his box in the breeding loft. He also won 3 x TOP 60 National.

The 2nd cock from Argenton is the 2074068/16, who has the 9th Int.Prov La Souterraine on his prize list. He is a son of “Dirk”, a super breeder paired with a daughter of “801”, a super top-class class pigeon that became the 1st West European Ace pigeon with “Jonckers” and is obviously super in the breeding loft as well.

What are the favourite Röhnfried products in Linter?

Every day of the year, these racers receive Avidress Plus plus UsneGano at regular intervals.

In the spring, they use a lot of Hexenbier, while on returning home from the first races, the pigeons also regularly receive Hexenbier for a period of about 3 days afterwards.

To ensure a fast recovery, the top products preferred here are: Electrolyte Plus and Mumm (glucose and vitamin C) plus Bt-Amin forte (amino acids to ensure muscular  support).

The future therefore seems to be safe and the competition is warned against next season. The youngsters remain in good health thanks to the use of Jungtierpulver and Immunbooster, a combination of two products that ensure that the intestines are kept in balance. This is very important not only during the preparation period but also during the period that these young birds are darkened!