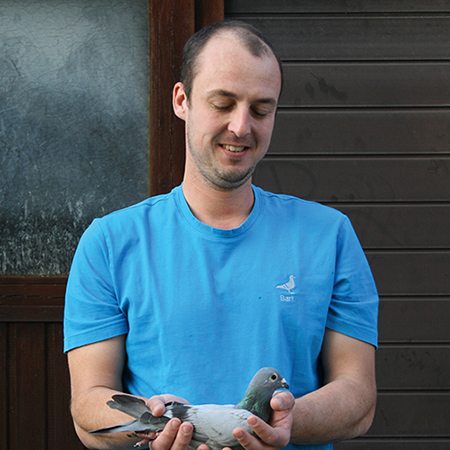 GEERINCKX is and remains at the TOP !

Gladiator – Wittekop Sylvester – the IJzeren – Willyke; all names of basis pigeons that shot to world fame in a short time. “Geerinckx = Soontjes”, whichever way you look at it, the name of Geerinckx will always be synonymous with the Soontjes pigeons. Super class on the speed and middle distance races. And even when they decided to join in other races, the birds kept on doing it ! Now even with the one-day 700 km LD races. Class proves its worth!  But even though here in Wommelgem, they sometimes also have poorer years with less good results, the next year, they’re back in the running. As in 2017 with fantastic results and ace-pigeons!

The breeders receive Avidress Plus and UsneGano in the drinking water every day. This enables them to stay in perfect basic condition. They also pay extra attention to the necessary nutritional supplements; with the breeders, specially fresh grit every day (Breeding and moulting mineral) and Topfit (minerals and trace elements). In preparation for the breeding period, Taubenfit E50 (vitamins to stimulate a good fertility) is also used and – during the breeding period – Gervit-W regularly on the feed.

Classic widowhood; both with the cocks and the hens

It’s hard work here in the Sportstraat in Wommelgem, and this applies not only to the fancier but also the pigeons. Although Bart is busy from morning to evening, top results can only be achieved by hard work. It’s all about quality, of course, and no mistakes are allowed. Everything is done as punctually as possible and they’re always trying to predict the weather conditions. As soon as the weather is good, the daily training flights start. It is therefore possible to start as early as the end of January. During this period, the pigeons receive plenty of Hexenbier to get rid of the old down. They regularly receive Hessechol and Pavifac on the feed.

The day they return from the race, they add Energy Oil  plus K+K proteins to the feed, while after a difficult race the birds all receive a K+K tablet to stimulate their recovery. Although they have had excellent experience with this, they only use it when it’s really necessary. The next few days, they use Entrobac (probiotic), which promotes the digestive system, yet another contribution to good health and good results.

With regard to nutritional supplements, Bart keeps to a weekly system. An example: sometimes the pigeons receive Blitzform for 4 days (this sometimes acts as an extra “boost”). The following week, he adds Bt-Amin forte to the drinking water, while another time the birds receive 4 days of Rotosal (extra regeneration).  In fact, it’s all down to the feeling they have for what the pigeons need at that particular moment.

Every week, on Monday and Tuesday, they add Ro200 (condition powder) to the food, enriched with oil. On the day of basketing: Electrolyte Plus in the drinking water + Avisana eye drops before basketing, together with a Flugfit vitamin tablet or an RO 200 tablet.

– Make sure there’s enough oxygen in the loft. Here we find an open aviary in front of each compartment and they are used as often as possible. Especially during the “dead” period, the pigeons spend as much time as possible in the aviaries.

The star of the show