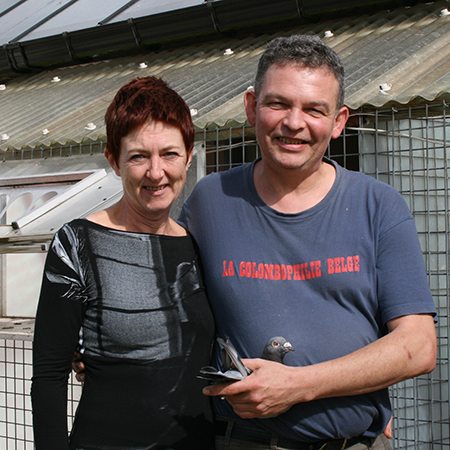 Surinx – Pletsers : Hilaire & Nadia – They started to race pigeons in Nieuwerkerken in 2000 and already in that first year, they became National Champion with young birds.  Every year anew, they are to be be found among the Provincial or National champions.  Last season, in 2016: 1 Prov Ace difficult MD KBDB – classifications with the national championships KBDB – Reserve Olympics Brussels.

As publishers of the racing pigeon paper in two languages; “La Colombophilie Belge”, they are responsible for about 80% of the public auctions in Belgium.

A strong foundation: When you take part in races for more than 20 weeks with the same group of pigeons (the birds get into the basket every week at a race of 100 to 700 km), you need to have a strong base. Those that can’t follow the rhythm, have to drop out! The colony is mainly based on the strain of Nationaal I Schellens – Herbots (super breeder and winner of 1 Nat Bourges – 1 Prov Orléans), reinforced by the strain of Yvan Herbots Brothers (double National Ace cock KBDB) and also returning to the base of Nationaal I and Bliksem Vandenabeele. In addition, there is also the old base of Clerinx Soontjes Herbots and, of course, they regularly buy top pigeons such as the super cock from Roger Rase; the Boonen, which won 11 x 1 (100 – 400 km) including 1 / 2181 p – 1 / 1452 p … and he became a super breeder (already father of 12 x 1 in Surinx Pletsers’ loft).  In the spring of 2015, they also bought a round of youngsters (40 pigeons) from the late Etienne Devos from Deerlijk. Inbreeding in his old base: Kleine Didi, Zidane, … this way, they are attempting to make the pigeons stronger. The first results of this reinforcement are remarkably good. In 2016, they kept them pure and of the 40 weaned and tested youngsters, they still have (at the end of 2017), after 2 seasons of testing, 8 left to participate in the LD races as adult birds.

Daily supplies: “when you have to work hard, you need to eat well”.

With this approach, good food is important and every day the pigeons receive a mix of good quality grains. Every morning, they get fresh grit, Expert Mineral, to which they add candy seeds and hemp. During the season, they also receive this mixture in the afternoon and towards the end of the week sunflower pits, peanuts and nuts. This provides the birds with extra energy.

After a race with 2 nights in the basket, the birds receive a K+K tablet (proteins).
Some important aspects in this regard: regular disinfection and protection for the eyes, both on the day of basketing, at their arrival home after the race and also on Wednesday with Avisana drops (probiotic drops to protect the eyes with a kind of “film”).

Before the season, for a period of 3 weeks, they use Avitonikum Aktiv (a herbal mixture with elements such as onion and garlic). Hexenbier is added to the drinking water every day and the food is moistened with Atemfrei and dried with Avimycine. These products ensure that the birds get “clean heads and white eye-rims”. The advantage provided by this period; the pigeons gain more resistance and the digestive organs are not “destroyed” – as used to be the case in the past with traditional antibiotic. This system is also continued during the racing season: every 2 weeks for 2 or 3 days, they use Atemfrei and Avimycine. In the other week, they give Hessechol (to clean the liver and to remove the waste products) in combination with Entrobac. This mix is super for the digestive organs. Sometimes, they also vary the intake by using Jungtierpulver and Immunbooster.

– Start with healthy pigeons, perform the necessary vaccinations and pay regular visits to a vet.

– If the pigeons do not eat enough, the pairs can get together for a few hours. After their separation, they will be much calmer and recover their appetite.

– A warm bath on the day of the race makes sure they recover faster. Sometimes they even repeat this at lunchtime on the day of basketing as this also increases their appetite.

– Water acidification makes sure the pigeons remain free from trichomonads, while also preventing many other problems. In this regard Avidress Plus or Avitestin (always in combination with UsneGano, an oragano-based that stimulates the appetite as well as soft feathers) is also used.

– Trust the vet and visit him regularly. The contact consists in short phone calls at least once a week, and once a month, they go and visit their vet Raf Herbots for an examination.

– The adult and yearling birds are basketed every week from the last weekend in March to the first weekend in September. The pigeons rarely stay at home: for the first 6 weeks, they take part in races  ranging from 120 to 400 km, and then from 300 to 600 km. Last season, they also scored well on the one day LD-races (more than 600 km!!!!).  Of course, all this is only possible if the pigeons get good food and top-quality supplementary products. Here you can find pigeons that have more than 6,000 km prizes on their prize-list (in a single season season).

– A fast recovery; on arriving home from the race, they receive Gervit-W and RO200 on the food plus – as quickly as possible – a K+K tablet. The day after the race K+K Protein Powder is added to the feed.

– During the racing season, the birds all receive Carni-Speed and Bt-Amin forte every day and while the season continues, they also add Blitzform for the last two days. The extra iodine provides stimulation.

At the beginning of the season, the old birds and yearling birds, the cocks and the hens, are darkened from 6:00 in the evening to 7:30 the next morning. Last season, this was done until the beginning of May, when they are exposed to light with Röhnfried I-Light lamps. These lamps closely simulate natural daylight and they are 100% convinced by it …. They even use these lamps in their own offices, where they have to work many hours a day.

A good season with several victories

On 2nd April, they started with a 1st prize against 428 yearlings in Chimay (110 km) and this with a granddaughter of their current basic cock; the “Boonen”. On Semi Provincial level, this was a 3rd prize against 2,081 yearlings.

In total, they won 12 first prizes (without doubling up).